I Regret To Inform You That Buzz Lightyear Is Hot Now

In the 'Lightyear' spin-off, Buzz finally has hair. So naturally he's sexy now. Voiced by Chris Evans, who called the project a “dream come true” for him, Lightyear shifts away from Tim Allen’s toy Buzz Lightyear that we’ve grown up with through the last four Toy Story films.

Instead, Lightyear takes place way before Toy Story and introduces the human astronaut who inspired the creation of the toy we see throughout the Toy Story franchise. Real meta.

But Pixar’s decision to pivot Buzz from beloved toy to beefy human means one thing and one thing only: Buzz Lightyear is sexy now.

Please watch the trailer and see what I’m talking about here:

Now maybe it is just because Chris Evans is voicing the new Buzz, but you can’t tell me that the Space Ranger doesn’t look hot in the 90-second teaser trailer. Right?

And a lot of this newfound sexiness basically stems from one huge change between the plastic toy and the animated man. No, it’s not the muscly body or the fact that Buzz looks like he stands at 6’6″. Nor is it the extreme daddy energy exudes. It’s that truly luscious mop of hair we’ve never seen before.

Throughout the Toy Story franchise, Buzz Lightyear’s purple cap was glued to his head, which makes sense. As a toy, Buzz would have never needed to remove the cap and change into normal clothes. For all we knew, Buzz was bald.

But human Buzz has proved us all wrong. Under his purple uniform, Mr. Lightyear has bouncy brunette hair. I mean, JUST LOOK AT IT. 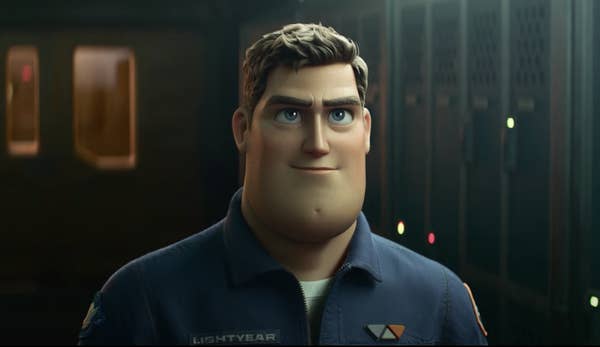 Sadly, not everyone finds Buzz Lightyear 2.0 as sexy as I do.

While some agree that Buzz is hot — and really, that he just looks an awful lot like Chris Evans playing Captain America — most have taken the time to note the, uh, very specific energy he exudes.

Unfortunately for Pixar, the animation studio’s decision to take toy Buzz and turn him into a human has sadly made everyone’s favourite astronaut into a bit of a himbo, “devil’s advocate” cop-type figure.

new Buzz be turning off his body cam https://t.co/Xs1P7OwGsi

2022 version is the frat dude in ur ethics class who plays devils advocate for every political topic https://t.co/JyVTiOz2n9

The new Buzz looks like he stormed the Capitol https://t.co/tGi3lqKTtL

He looks like he teach history because the school board made him too but he really wants to be a full time coach? https://t.co/GVHb1uZG7Z

But despite what people say about the energy the new human Buzz Lightyear radiates, the astronaut is still very hot. And I’m not sure if he even has kids in Lightyear, but I’m ready to declare that Buzz is a certified DILF and easily joins the hot Disney/Pixar dads list.

Although no one will ever beat out the hot dad from Inside Out.