The Latest ‘Hunger Games’ Film Is Unsatisfying, But In A Deeply Meta Way

The fascinating thing about 'Mockingjay: Part 1' is how closely its narrative mirrors its production. In this third instalment of the Hunger Games series, which hits Australian cinemas today, Katniss Everdeen (Jennifer Lawrence) has a revelatory moment as she watches her love interest Peeta Mellark (Josh Hutcherson) beg for an end to the rebellion against the Capitol, live on national TV. She murmurs, “He’s still playing the game.”

Oh, hen. Everyone is. Katniss has always been more comfortable in action than in reflection, and that’s both her strength and weakness. In the two previous Hunger Games films, we saw how her essential authenticity prevailed in a game of hidden agendas. Nobody saw her as a player. That’s why she won.

But Katniss was innocent enough to believe the game ended. Now, she’s a reluctant symbol of hope in a civil war whose rules of engagement are constantly shifting.

In many ways this film is unsatisfying. While Catching Fire ended on a cliffhanger that annoyed some viewers, to me it felt like the end of The Empire Strikes Back: a pause after a genuine moment of political crisis and change. But Mockingjay Part 1‘s biggest problem is that it really feels like half a movie.

Stuck in a holding pattern, Katniss craves real action — and so do we! Not much actually happens. The proles in the districts continue to rebel (I did enjoy the Lumberjack Proles, though); President Snow (Donald Sutherland) continues to be hammily evil; and the action that drove the previous Hunger Games movies has given way to lots of speechifyin’. Gale (Liam Hemsworth) finally gets some serious screen time, yet he’s about as charismatic as the rock Peeta camouflaged himself as back in the first Hunger Games. But Mockingjay: Part 1 offers a surprisingly bleak deconstruction of propaganda – including, audaciously, the way blockbusters like this are conceived, filmed and marketed. President Snow is making the captive Peeta sell himself out on TV like a grim twist on the bland guff that Hutcherson himself will be expected to spout in real-life talk-show promo spots. Meanwhile, District 13 President Alma Coin (Julianne Moore, in a terrifying Top of the Lake wig and creepy silver contact lenses) seems mainly interested in uniting the districts behind a teen figurehead – much as Lawrence’s own likeability will draw audiences to cinemas.

A Film Within A Film, With Actors Watching Audiences

Lawrence has always been an appealingly instinctive, gestural performer, which is important in conveying her character’s interiority. But our understanding of the ‘real’ Lawrence as refreshingly ‘authentic’ also dovetails with the authenticity that makes Katniss such a compellingly heroic Mockingjay.

Is that authenticity a calculated Cool Girl pose? Or, as Vulture’s Jordan Hoffman asked a year ago, “Is Lawrence Katniss-ing us?” (It’s like catfishing, but by being charmingly dorky and relatable.) Because the other fascinating thing about Mockingjay: Part 1 is how closely its narrative mirrors its production. They hold an honest-to-god marketing meeting, during which they brainstorm Katniss’s most emotionally engaging moments from the previous two Games. (What does this tell us about Hollywood studios?) But Katniss isn’t garrulous and goofy like Lawrence’s public persona: she’s taciturn and stubborn. If the film only seems to come to life when Katniss gets back on the frontline, that’s because the filmmakers both within and behind the story figure out that she’s incapable of merely acting heroic. She follows her instincts and takes action.

District 13’s propaganda strategies match the film’s marketing – the first ‘propo’ starring Katniss as the Mockingjay ends with the same bird logo and four-note whistle motif as the film’s own trailer. Recognising this synergy, fan activist organisation the Harry Potter Alliance is running a campaign, Odds In Our Favor, which works the other way around: deploying the franchise’s rhetoric to protest real-life income inequality.

What holds this unfocused movie together is Lawrence’s magnetic acting. We’re willing to follow Katniss through a period of trauma and grief that doesn’t really drive the plot forward because Lawrence makes her seem so tender and transparent.

The things Katniss is called on to do in both the movie and the movies-within-the-movie are really as minor and clichéd as the campaign ads of any baby-kissing patriot politician. But Lawrence’s acting has the same naturalistic charisma that the District 13 marketers require of their Mockingjay. She can’t help showing outrage at injustice and shock at duplicity, and that’s why the districts rally to her — as cinemagoers also do.

Sating Our Hunger For The Real

For psychoanalytic theorist Jacques Lacan, the ‘Real’ is what we see in moments of crisis – such as war or catastrophe – when the familiar trappings of everyday life are suddenly stripped away and come to seem like the illusion hiding a nightmarish truth. 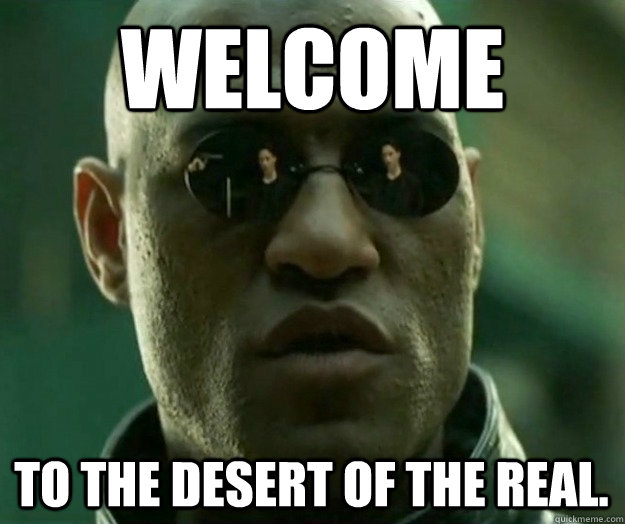 Unmediated, authentic experience is as impossible in our world as in Panem’s opulent Capitol, whose citizens’ yearning for something Real is sated through the staged carnage of the televised Hunger Games. But as Slavoj Žižek notes in his 2002 reflection on the 9/11 attacks, attempts to summon the Real produce only their opposite: political theatre to be consumed as spectacle.

Perhaps another reason Mockingjay Part 1 is so unsatisfying is that it denies us the spectacle of savage conflict that the first two films offered (even as they argued it was immoral to enjoy them). We don’t see the retaliatory bombing that wiped out her District: only Katniss’s horror and grief on seeing the impact of that bombing. Do we secretly yearn to watch a carnival of CGI destruction, as we do in so many other Hollywood blockbusters?

It’s tempting to draw analogies between Panem’s politics and our own duelling ideologies – religious fundamentalism versus global capitalism, or dictatorship versus liberal democracy. But mostly, Mockingjay: Part 1 underlines the rhetorical similarities between the oppressive Capitol and the liberatory District 13. The Capitol’s decadent consumerism, enabled by the regional brutality of insectile storm troopers, represents imperial fascism. But District 13’s grey military jumpsuits and alarming “Hooah!” fist-pumping are just as fascist, in a different way. And so is Coin’s determination to squeeze the heroism from Katniss.

One disquieting conclusion (a peep into the Real) is that spectacular action is inherently fascistic. Whether we’re watching a suicide mission to blow up a hydroelectric power station, or regarding charred corpses, bombed as they fled in terror, we must contemplate the possibility that there is no moral high ground; both sides justify their violence on their own citizens as an inevitable cost of winning this fight. We have always been at war with Eastasia.

Compared to the bombast of the Real, Katniss now finds the once-consoling beauty of nature unreal and dreamlike. District 13 deer are weirdly unafraid because they’ve never been hunted. And the peace of a pristine valley seems so obscene that, prompted to sing, Katniss chooses a grim lament about lovers reunited by being hanged from the same tree. Jennifer Lawrence’s voice is affectingly breathy and modest. Something in her mournfulness sounds… real. And cinema audiences will soon join in her song, much as a choir of proles marches to their death by machine gun.

The Hunger Games: Mockingjay – Part I is out now.