It is a truth universally acknowledged that IT STILL RULES. Twenty years ago, the BBC premiered its miniseries of Jane Austen’s Pride and Prejudice, starring Jennifer Ehle and Colin Firth. It became a TV landmark, minting Firth as an international heartthrob and screenwriter Andrew Davies as television’s go-to dramatist. And it fuelled a new outpouring of Austen mania.

This achievement is even more striking when you consider how extensively Pride and Prejudice had already been mined for the screen. Aside from the 1940 film starring Lawrence Olivier and Greer Garson, the BBC had already adapted the story in 1938, 1952, 1958, 1967 and 1980. But Davies and producer Sue Birtwhistle wanted something much more glamorous and vivid than earlier TV dramas, which tended to be shot on video in stagey sets.

Shot on Super 16mm film, the six-part series had a budget of £1 million per episode, and boasted 24 locations plus eight studio sets. While Brideshead Revisited (1981) had previously set the standard for this kind of lavish costumed miniseries, critics loved Pride and Prejudice. They still do. In 2000, it appeared on the British Film Institute’s list of the 100 greatest British TV shows of all time; it also made The Guardian’s 2010 critics’ poll of the 50 best TV dramas.

Up to eleven million people in the UK watched the initial broadcast between September 24 and October 29 1995, and it sold 200,000 copies on VHS in its first year. It went on to screen around the world – including on ABC in Australia – and it’s had four DVD releases, most recently a high-definition transfer from the original negatives in 2009.

This wild success created a wave of other prestige literary adaptations for the small screen. Davies wrote many of them, including my personal favourite, The Way We Live Now (2001). He also wrote the screenplays for the Pride and Prejudice pastiche film Bridget Jones’s Diary (2001) and its sequel Bridget Jones: The Edge of Reason (2004).

But even Joe Wright’s fresh, impressionistic 2005 film of Pride and Prejudice, starring Keira Knightley and Matthew Macfadyen, couldn’t knock the 1995 miniseries from its canonical perch.

You must allow me to tell you how ardently I admire and love it.

“He Is Perfectly Amiable”: What Makes Colin Firth The Ultimate Darcy

“Pride and Prejudice is all about sex and money, about young people with pumping hormones,” Davies said in 2003. “Darcy is supposed to marry this sickly aristocrat, but as soon as he sees keen-witted, rosy-cheeked Elizabeth Bennet panting from a walk, he gets an instant erection.”

Not that I noticed (although there’s plenty of Regency Cameltoe on offer). But Darcy was definitely not the only one who got wet in that famous lake scene. A scene which was completely invented by Davies. 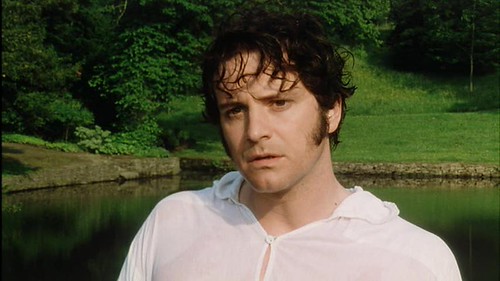 It’s strategic that we see these unguarded moments, because Firth’s Darcy is otherwise a paragon of reserve. We know from the start, as Lizzy does not, that “he is perfectly amiable”, but his feelings only leak out in microexpressions: a sly half-smile when Lizzy has pleased him; rapid blinking when he’s flustered; and of course, that smouldering, appraising gaze.

Contrasting Firth’s disciplined performance, Jennifer Ehle’s is wonderfully limpid. Lizzy’s emotions play freely across Ehle’s face, so we never have to wonder what she’s thinking or feeling. No wonder Darcy finds her “fine eyes” so fascinating. Also, something I’d forgotten about this adaptation – but which I found charming on rewatching – is its corny, completely unironic use of dreamy close-ups to signify Lizzy’s and Darcy’s vivid memories of one another.

Firth and Ehle had an affair during filming, which perhaps provided some of the irresistible spark between the co-stars:

It’s because the series encourages the viewer to gaze on and fetishise Darcy that Firth has found himself unable to escape the role. “If I spent 20 years training to be an astronaut, the headlines would still say Darcy Lands On Mars!” he told The Guardian in 2001.

His intertextual casting as Mark Darcy in the Austen appropriation Bridget Jones’s Diary (2001) only fuelled his typecasting as a buttoned-up Englishman hiding a deep well of passion. The vulnerability we were encouraged to detect in Pride and Prejudice still infuses Firth’s performances, both in obviously Darcy-esque romances (Love Actually, Easy Virtue, Magic in the Moonlight) and stories of loneliness, grief and trauma (A Single Man, Genova, Tinker Tailor Soldier Spy, The King’s Speech, The Railway Man).

“I Am Excessively Diverted”: Pride And Prejudice As Feminine Comfort Food

In 2013, a UKTV poll voted the lake scene the most memorable moment on TV. It was immortalised in a truly comical sculpture, which has bobbed up in bodies of water worldwide – including last year at Como House in Melbourne.

Studly, wet-shirted Darcy symbolises a broader pop-cultural trope to which shirtless Aidan Turner, wielding a scythe in the recent Poldark adaptation, is just the latest heir: the period-drama-fan-as-a-single-woman-who-watches-compulsively-at-home.

This is the stereotype being lampooned in the miniseries Lost in Austen (2008) and the surprisingly funny and enjoyable film Austenland (2013). Such stories introduce a heroine who literally projects herself into the Austen universe in search of that kind of romance.

Jane Austen enthusiasts have long been disparaged as ‘Janeites’: obsessive, excessive women. But as her books entered the English literary canon during the 20th century, liking Austen became more respectable – though still overwhelmingly feminised. Old Friends and New Fancies (1913) by Sybil G Brinton is recognised as the earliest example of Austen fan fiction; but until the 1995 miniseries came along, such works were but a trickle.

Then came the flood. According to Wikipedia, six Pride and Prejudice literary adaptations were published during the 1990s — but 72 sprouted during the 2000s, and 145 so far in the 2010s. Those are just the books: there are scores more films and TV series, as well as cosplay, pilgrimage-style tourism, and other fan pursuits.

The series is full of little throwaway moments that reward repeated viewings. The sisterly solidarity between Jane (Susannah Harker) and Lizzy; the way Charlotte (Lucy Scott) pragmatically handles her foolish, brown-nosing husband Mr Collins (David Bamber); and my personal favourite, the bit when Kitty (Polly Maberly) flees the visiting Mr Collins, and is then spotted peering through the window as her sisters endure his company. It’s because this miniseries understands and indulges the pleasures of watching that it remains so enjoyable, and has become so culturally powerful.

UKTV is currently screening the 1995 Pride and Prejudice miniseries on Sunday nights.

Mel Campbell is a freelance journalist and cultural critic. She blogs on style, history and culture at Footpath Zeitgeist and tweets from @incrediblemelk.