Review: ‘Zootopia’ Is A Perfect Example Of Why We Should Take Kids’ Movies Seriously

More than a few adults could learn something from watching movies like this. WARNING: I intend to write a serious and critical review of a movie about a cartoon bunny who wants to become a police officer. If you are already heading to the comments, raring to type “Who cares!?! It’s only a kids’ flick!!” please excuse yourself from the internet and, I don’t know, go watch Shrek and Donkey’s 3D Halloween Jamboree again. Because Zootopia is carefully plotted, beautifully designed, has careful emotional arcs, and made me feel proud that I guessed the bad guy three minutes before the film announced the twist.

It also dares to delve into the murky dangerous waters of contemporary racial politics. And I haven’t even got to the fact that it has a sheep voiced by Jenny Slate, and a tiny shrew wedding, and this bit with the sloths, and a fennec fox, and also the sloths.

Excuse me while I blatantly soapbox (a line of delivery that Zootopia gratefully never stoops to). Why is there a school of thought that films made for young audiences are of no consequence; that 80-odd minutes of bug-eyed characters yelling non-sequiturs in colourful landscapes is enough? This defence arises whenever a critical eye is cast upon entertainment for young people and it’s always the same. Just because a young person will watch crap doesn’t mean we should serve it up. You could pour a bag of sugar into a slightly larger bag of noodles and most kids would happily scarf down the lot. But, crazily, we accept that growing bodies need some level of sustenance. Don’t we have a responsibility to provide their brains with the same? 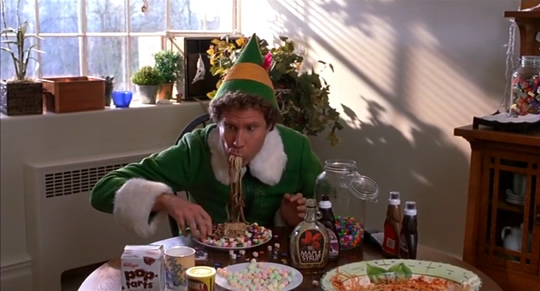 This is your child’s brain on Ice Age 3.

Zootopia possesses all the wit and charm of The Flinstones and Monsters Inc — films that built worlds adjacent to our own but delightfully adapted to fit a crazy range of citizens. Scale is used as a punch line and provocateur — the whip-snap of the camera as it jumps to include both elephants and mice continually raises a laugh, while begging the question — why is our expectation of perspective always set to the middle-sized majority? Typical animal behaviours play for gags while tugging at our assumptions. Why can’t a bunny be tough? Really, all foxes are untrustworthy? “Are you saying because he’s a sloth he can’t be fast?”

With its prey/predator divide, Zootopia, at first, appears to be a simple parable about bullying — the world is once again divided into bookworms and playground punks. Judy Hopps (Ginnifer Goodwin) arrives in Zootopia as a keen cadet, ready to make the world a better place. She’s soon shunted onto parking ticket duties because of her size, but becomes embroiled in a missing-otter case, and ropes in cynical grifter Nick Wild (Jason Bateman), a fox, to assist her in navigating the shadier parts of town. Along the way they mix it up with stern police chiefs (Idris Elba), slimy mayors (JK Simmons), and weasely weasels (some animals are typecast for a reason). To dig any deeper into the plot would give away a perfectly great detective narrative. Yes, the set-up is a little obvious, but the politics of the city soon make it interesting.

The police officer and the criminal, forced to work together, is a classic Hollywood set-up – the odd couple on opposite sides of the law, and the convention has led to movies both good (Midnight Run, Kiss, Kiss, Bang, Bang) and bad (Hot Pursuit). The odd couple trope gets put into play (again and again and again) because it allows both parties to progress through communication – Oscars fix up their ramshackle lives and Felixes learn how to live a little. The cop and crim pairing further pokes at our preconceptions – can we ever really trust one another? Just because you can be charged for a crime, should you be blamed? Is the world really black and white?

This last question weighs heavy on the movie, and not just because it seems primed for a zebra crossing gag or two. Zootopia may begin with the standard kids’ flick message — believe in yourself! — but it soon rattles a stick at this hoary plotline. What if your belief in yourself hindered your ability to recognise the trials of others? Which kinds of prejudice are annoying, and which are institutional, and insurmountable? At a time when people are more outraged by accusations of racism than they are by actual racism, it’s fantastic that a protagonist in a kids film has to confront their own prejudices. It’s fascinating that an American film, in this current cultural climate, allowed the police force to be the good guys, but also showed how out of context statements and statistics can unfairly scapegoat marginalised parts of society. And it’s flat out bizarre that all this happens in a film where hips-don’t-lie Shakira plays an inspirational pop star who is a gazelle and is also named Gazelle.

Zootopia confidently deals with the contemporary discourse around race. And, just like other mass entertainment products that attempt to wade into the quagmire of best intentions, political (in)correctness, and checking one’s own, and others’, privilege (Empire, Dope and Macklemore spring to mind) it is sometimes queasy, sometimes poignant, sometimes on point. But I mean, come on – what was the last kids film that stumbled because it was overreaching in its exploration of inclusiveness?

Zootopia is in cinemas from March 17.