Following this morning's sad news, we look back at some of the great actor's best roles. The sad news marks the end of a varied acting career that saw him collaborate regularly with arthouse hero Paul Thomas Anderson, leave his mark on big-time franchises like The Hunger Games (his turn as Plutarch Heavensbee in Mockingjay will serve as his final film performance), and take to the Broadway stage to play Iago in Othello and Willy Loman in Death Of A Salesman.

His hulking presence was a regular fixture at awards season, winning the Oscar for Best Actor in 2005 for his role in Capote, and being nominated three subsequent times for supporting roles in Charlie Wilson’s War, Doubt and The Master. But whether greeted with acclaim or not, Hoffman’s career was filled with memorable performances. Let’s revisit some of our favourites…

Something happens to us when great artists die. At the moment when we hear the sad details — the too-young heart attack, the battle with disease or drugs lost quietly in the night — we feel that we have lost not only this person but all they would have given us had they continued just a little longer. When we reencounter those works that made us care so much about these strangers, it is like encountering a ghost. This is true of actors most of all.

Philip Seymour Hoffman left many memorable ghosts, though the one I will visit most is Caden Cotard, the genius theatre director from Synecdoche, New York who creates a work of art so detailed it seeks to replace the world. As Cotard, Hoffman lives a whole life, filled with ambition, love, failure, and finally acceptance that he can’t control the world, not even in its representation. Because in the end there are only ghosts and wreckage; because for all of us the final scene ends with, ‘close your eyes, die.’

Before The Devil Knows You’re Dead is the first film I remember really loving. It’s a movie about bad people making bad decisions that turn other, mostly-good people into bad people too. Obviously, with Sidney Lumet directing and Albert Finney, Ethan Hawke and Marisa Tomei as increasingly deranged characters, it had a reasonable starting point — but Hoffman carried the film.

The casual confusion with life that Hoffman presented was confronting, and the pervasive “why me?” that underpinned his performance convinced me that a good movie was more than just zombies and explosions. It lead to me devouring everything he’d ever been in or created, waiting on his every release – and more widely, learning to actually love film, rather than casually absorb it. Philip Seymour Hoffman never lost his lustre for me, and neither did his films — mainly thanks to Before The Devil Knows You’re Dead.

I still watch it frequently, and it still fills me with the same tension and sense of ill-ease. So thanks, Philip. You were the best.

The Talented Mr Ripley is one of those movies that I always come back to on a rainy day. The elegant, ’50s-set suspense thriller has a tightly-written plot and a pretty impeccable cast.

Philip Seymour Hoffman plays the small but crucial role of Freddie Miles, with trademark smarts and menace. As accomplished a con artist as Tom Ripley (Matt Damon) might be, he can not fool the smug rich-boy Freddie, who immediately sees through his deception, and then starts pulling at the threads. Unfortunately for him, Freddie finally pushes Tom that little bit too far and meets a fairly sticky end. The wonderful ‘Tommy, how’s the peeping?’ scene still makes my skin crawl a little bit.

Mike Nichols’ monument to Arthur Miller’s Death of A Salesman was the most extraordinary piece of theatre I’ve been lucky enough to witness. It was my last day in New York and I’d lined up for two hours, before the person in front was informed it had sold out. As I was leaving, I was called back in. There was one rush ticket for under-30s available after a last-minute cancellation: $30, and in the third row. I sat by myself, and was overwhelmed. I cried through most of the show.

As 62-year-old Willy Loman, the 44-year-old Hoffman had gained a large amount of weight — not, as many critics assumed, on purpose, although it did add to his performance. The heavy way he dragged himself across the stage; his wet, thick voice as Loman talked to himself, alone; the huge, despondent flatness of a once-optimistic man, beset by the tragedy of a failed American dream which he can’t and won’t acknowledge.

Overweight and struggling with addiction at the time, Hoffman was the physical embodiment of the post-war American middle class: a man who, once-titanic in the eyes of his sons, his wife and himself, was now delusional, failed, and sad. It was a completely unforgettable performance. 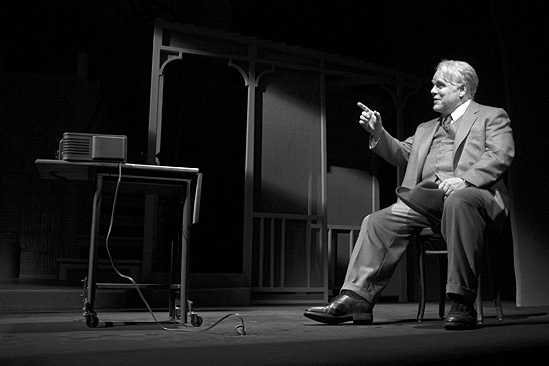 Hoffman nailed each and every part he was given, but the way in which he could infuse his minor roles with such humanity was unparalleled.

There are three more smaller moments which, for me, completely set PSH apart from everyone else acting today: his role as Scotty J in Boogie Nights, his role as Lester Bangs in Almost Famous, and his role as Brandt from The Big Lebowski. These three characters capture everything you need to know about him as an actor.

As Brandt, Hoffman is perfect: conniving, protective and pretentious. Just the way he says “Dude” in a sentence is glorious. Every time he rolls his eyes; amazing.

I love Brandt, I’ll miss Philip Seymour Hoffman, and this laugh will be with us forever.

Much like Buscemi’s googly-eyed cameos in Sandler’s work, it showed a Serious Actor not afraid to embrace his goofier side; just a guy having fun with his job. Although the infamous “sharting” scene might be more useful as a two-fingered salute to the weirdos who liked seeing him play sad, I particularly like this basketball scene, because it hits so close to home. Raindrops!

In Doubt, Hoffman played a convivial, modern-thinking priest who clashes with an old fashioned nun, played by Meryl Streep. At first, Sister Aloysius seems to reject Father Flynn based on a personal preference for Old Testament sermons and traditional education. Later, she suspects him of misconduct with an altar boy, and her accusations make things difficult for the parish. The truth in the matter is long in the coming, and relies on the audience sympathising with opposing ideals, and playing devil’s advocate with little to no evidence.

What is there in Hoffman that can make the audience doubt the friendly Father? There’s the aftertaste of earlier roles, heavy breathing perverts and schlubby messes and fierce calculation; with Hoffman there is always another layer of thought. What is there in Hoffman that allows us to doubt the Sister’s accusation? There is so much charisma, a genuine warmth, an understanding in his pale eyes that says, from beneath ginger caterpillars, “I’m here with you. I get it.”

The following scene lets you play a hundred little variations on a game. When Streep’s rigidly righteous nun says “you’re controlling the expression on your face”, watch Hoffman, and wonder whether the priest is, and whether Hoffman is, and wonder how an actor can walk such a fine line so that we both know, and don’t know, the characters he played.

Hoffman’s character here — a mattress salesman, phone-sex line owner, and bantam-weight extortionist — seems like a sleazy joke just by appearance, with his fussily long hair, open collar, and necklace. But as soon as Hoffman opens his mouth he brings the noise: all the sound and fury of a dim man whose major skill-set is being a bully.

It would be easy to remember Hoffman for the beautifully modulated variations he played on depression or weakness throughout his career, but he also had an amazing facility with dead-eyed rage. And it all seemed to come from the same source.

Whatever the role, Hoffman always seemed to be teetering on the surface of a roiling mass of inchoate feeling that he couldn’t control.

While obviously one of the finest actors in living memory, I’ll remember Philip Seymour Hoffman for his stoicism, and the uncompromising manner in which he conducted his career. Unfortunately, I’ll remember all that because when he did compromise, either by accident or design, you could see the anguish – as an actor, it was either his greatest strength or weakness that he just couldn’t sell bullshit.

As star of Richard Curtis’ execrable The Boat That Rocked, Hoffman was required to drop some of the silliest, clunkiest dialogue I’ve ever heard. Of course, he did so with typically droll timing, but there’s something in his demeanour that screams ‘Help! I’m in a shit movie!’ with a tragic eloquence.

But when Scotty meets Dirk Diggler (Mark Wahlberg), he falls helplessly, hopelessly in love. In Orgazmo, which was released the same year as Boogie Nights, Matt Stone plays the same kind of character purely for laughs; but it’s Hoffman’s un-selfconsciousness that makes you both cringe away from Scotty and ache on his behalf. The scene in which Scotty clumsily tries to seduce Dirk is a masterpiece of desperation and self-loathing. You realise this guy knows who he is, and can’t bear it.

No one created empathy for pathetic characters quite like PSH. Love Liza — written by his brother Gordy — received mixed reviews, but there was no denying his portrayal of Wilson Joel, a web designer who turns to petrol-sniffing after his wife’s suicide. This was quintessential Philip Seymour Hoffman: lots of yelling, drastic mood swings, and set-pieces made all the more devastating when paired with the songs of Jim O’Rourke. But it was also a very nuanced and tender performance, especially when Joel finds solace in flying model airplanes. Today’s news makes you wonder whether playing characters like Joel was really acting for him.

For many people born after he died, when they think of the legendary rock critic Lester Bangs they picture Philip Seymour Hoffman: grinning, disdainful, probably unwashed, thrashing around a radio station or smoking alone, surrounded by records.

Bangs, like Hoffman, died alone in his New York apartment of an accidental overdose, and like Hoffman, had the fundamental, wry sadness of genius about him, an aura of monkish devotion to making and loving the sliver of art that’s actually great because everything else in the world is fucked.

Hoffman’s version of Bangs is onscreen for all of about 15 minutes, but he’s the heart of the film. Watch him tell the teenage aspiring rock-writer protagonist (an avatar for director Cameron Crowe, to whom Bangs was a hero) that all that’s left of rock and roll is the “death rattle”, even as there’s a gleam in his eyes that wants to believe in this kid as much as the kid believes in him.

Nobody has ever said “Iggy Pop!” with as much joy. “The only true currency in this bankrupt world is what we share with someone else when we’re uncool.” He was both hope and hopeless; someone you wished you could be like, because when you’re 15 you can’t grasp the essential loneliness of brilliance, and can only see how bright they burn.

To commemorate Hoffman’s career, Foxtel’s STUDIO will be airing a special screening of ‘BAFTA: A Life In Pictures With Philip Seymour Hoffman’, tonight at 7pm (AEDT).