Michael Fassbender Is More Than Just A Pretty Face In ‘Frank’

Frank is in Australian cinemas now. Michael Fassbender has become one of the most bankable movie stars working today. Beyond his collaborations with British director Steve McQueen — Hunger (2008), Shame (2011) and 12 Years a Slave (2013) — he’s dabbled in disparate genres, from art house (Fish Tank, 2009), to literary adaptation (Jane Eyre, 2011) to historical reimagining (A Dangerous Method, 2011) — and he’s even entered the worlds of sci-fi and fantasy, with Ridley Scott’s Prometheus (2012) and as Magneto in the recent X-Men franchise.

Seeing his face up on the big screen has become a cinematic stamp of quality. But in the endearing dramedy Frank (2014), it’s not Fassbender’s face that director Lenny Abrahamson is interested in.

The film examines the role of performance in the pursuit of artistry, with Fassbender playing a literally big-headed, larger-than-life indie synth frontman. Frank is loosely based on Frank Sidebottom, a “fan” of 1980s punk band The Freshies who was conceived of by the group’s frontman, comedian Chris Sievey. But with his huge, spherical, papier mache head, Sievey’s alter ego soon took on a life of its own, becoming frontman for a real-life ensemble the Oh Blimey Big Band. 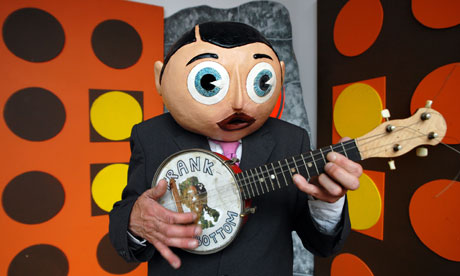 The screenplay is the collaborative efforts of Peter Straughan, and Sidebottom’s real-life Oh Blimey Big Band keyboardist, Jon Ronson – a journalist, radio presenter and non fiction author. Ronson built upon his own experiences as one of Sidebottom’s musical sidekicks, and draws heavily on his research of and experience with mental illness to create this great fictional melan-comedy of a film. Frank bites at the thorn in any true musician’s side: the pursuit of success, versus artistic integrity.

In his guise as Sidebottom, Sievey doubled as his own biggest fan — a statement about fame and ego that translates effortlessly into the narcissistic 2010s. But while Sidebottom was only ever Sievey’s entertaining alter ego, the film wonders what it would have been like if ‘Frank’ was real. The result is a movie that charts the rise and fall of an experimental British musical outfit, whose lead singer – for reasons initially unclear — wears a giant cartoony head, even when showering.

Frank’s band itself is a satirical take on the often impenetrable world of indie alternative music: not one of the pretentious screwballs who play in Soronprfbs knows or cares how to pronounce its name. And no one bothers to bat an eyelid when their keyboardist attempts suicide. This is where Jon (Domhnall Gleeson) enters their otherwise old-school world, a ‘regular’ guy who spends too much time #hashtagging on Twitter, and introduces them to the self-serving ways of the twenty-first century.

After tweeting his private experiences as the newest member of the band, Jon becomes giddy from the dizzying heights of online celebrity, and his growing appetite for fame leads him to take advantage of the people around him. Secretly filming his fellow musicians during rehearsals, Jon builds an online following for the band. At first, this sounds like a good thing. But what he refuses to admit — to anyone, including himself — is that the thousands of followers, likes, views and fans they have amassed online does not translate into an IRL fanbase.

There’s a much sadder subtext to the story, too: Jon’s attempt to make Frank famous successfully turns his mental illness into a gimmick. Though Jon is clearly trying to capture what it is that makes Frank so enigmatic, his feverish examination of every aspect of Frank’s life only brings about a deeper depression in the frontman, and a more acute alienation.

Revelling in its biting discourse against the evils of our socially surveilled world, the film sees everyone hit rock bottom – and all because of one man’s desire to prove himself to a bunch of strangers in cyberspace. The disastrous narrative progression communicates Ronson’s indictment of false fame, and the loss of dignity that comes as one abandons art in its wake. Though the film ultimately allows it’s characters some resolution, the damage caused along the way is irreversible.

Frank’s oversized head is a literal reminder of the damage an inflated ego can cause. His insistence on hiding behind a mask also warns us against the folly of creating a persona that is larger than the person behind it. And the fragile, self-manufactured face of the band is a not-so-subtle metaphor for the narcissistic destruction that comes with the pursuit of celebrity where artistic integrity once lived.

Michael Fassbender‘s face is not at the centre of Frank, but his evocative physical performance proves the film’s central thesis: success is about a lot more than a great face.

Frank is in cinemas now.

Tara Judah is a Melbourne-based film writer who has been published in Metro Magazine, Screen Education, Overland, and The Big Issue. She also co-hosts a film criticism podcast on Triple R. Her twitter is @midnightmovies.