Let Me Tell You About The Time My Uterus Exploded

Vaginas might make us uncomfortable to talk about, but that’s no reason to stay in an abusive relationship with one. Over the weekend, a friend on Facebook tagged me in a Buzzfeed listicle. Not the usual post of kewt piglets or a ‘Which Beyoncé Are You’ quiz; this one was dedicated to Endometriosis Awareness Month, which happens every Month. I happily scrolled through endless gifs, chuckling along at what, for me and 175 million women worldwide — or one in ten Australian women — was an all too familiar scenario.

Endometriosis is a condition in which the endometrium, the tissue that normally lines the uterus (a woman’s womb), grows in locations outside the uterus. It has a tendency to clump and harden and adhere to organs outside of a woman’s reproductive system, and has trouble shedding itself in the course of a normal menstrual cycle. There is a laundry list of accompanying symptoms, which vary from person to person: for me, it was pelvic pain, ovulation pain, leg pain, nausea, lethargy, reduced libido, bad skin, night fevers, digestive problems – not to mention general disdain at the world for inflicting me with this brand of monthly torture. Currently, the only way to diagnose endometriosis is through laparoscopic surgery (which doctors are generally not eager to send teenage girls into, in case it is unnecessary).

I’ve been seeking treatment for these symptoms since I was 15 years old, yet I was only diagnosed last October. I am now 30. For 15 years, I’ve bounced between doctors and specialists, looking for an answer or effective treatment options, but doctors unwilling to see my symptoms as anything but “difficult periods” have largely defined my history with the condition.

My experience mirrors nearly every other story about endometriosis that I have ever read. I would like to see that change.

The average woman presents symptoms of endometriosis for 10 years before they are diagnosed.

When I first became aware that my periods were different from others, I was 15. My mother explained that sometimes your period can hurt, and a hot water bottle supplemented by a block of chocolate and a Meg Ryan movie was a PMS BFF.

The pain would often fluctuate from standard uterine petulance to searing intensity – several times I blacked out from it, and once I even lost my hearing. Many times at school, I would run out of class with no notice, and puke into my hands on the way out the door. I couldn’t eat anything but Gummi Bears, my uniform was uncomfortable and impractical, and the thought of putting up with teachers and boys — and the constant terror that my tampon would leak — was as exhausting as the pain itself. When mum grasped the intensity of what I was experiencing, she promptly took me to a gynecologist. This was the first time endometriosis was mentioned to me, but the doctor concluded that I was too young, and did no further investigation into my symptoms. He put me on the pill and, in jest, told me that falling pregnant was often the best cure for menstrual pain.

Let me reiterate: I was 16, and a specialist was suggesting that while I was not yet old enough to have a real medical condition, I was old enough to consider getting pregnant to solve it.

It took three more years until a GP took my symptoms seriously, and put me on Depo-Provera — not to treat the cause of my symptoms, as I was still lacking a diagnosis, but to completely eliminate them. Depo-Provera is an intravenous contraceptive that has the effect of completely stopping your periods after about 8-12 months of use. Unbeknownst to me, it also increases your risk of osteoporosis, as it blocks calcium uptake. The American Congress of Obstetricians and Gynecologists (ACOG) advise that Depo-Provera use should not exceed two years. I was on it for four years, until I simply stopped showing up for the quarterly injections – not because of any advice my doctor had given, but because I had done my own research. Well into my mid-20s I was still searching for a doctor who would see my symptoms as something other than a mysterious affliction. My reproductive health fell into a medical “too hard” basket, and a lack of knowledge of or understanding about endometriosis and lady parts in general led to an escalation of my symptoms — which in hindsight could have been entirely avoided.

I blame this inaction for the ectopic pregnancy and subsequent rupture I experienced five years ago.

The average woman is 27 when she is first diagnosed with endometriosis.

At 25, I was now used to painful, odd periods; I had no reason to think that the bleeding I was experiencing was my fallopian tube hemorrhaging out. The pain was just another ordinary occurrence — until the discomfort became so acute I could not walk or stand. My GP thought it might have been appendicitis and sent me for an ultrasound the next morning. The technicians immediately picked up an unexpected ectopic pregnancy that had ruptured, and sent me to the emergency room at RPA where I was admitted for surgery. The rupture, I was told, was life-threatening; there was no chance of saving the pregnancy or my exploded fallopian tube.

I was released from hospital after a few days and advised that my test results would be available in 4-6 weeks, but my GP only received those results last August. Four years later. Ectopic pregnancies and miscarriages are very common in women suffering from endometriosis, but without information from the surgery, I had no explanation as to how it occurred or why. I’d hoped the rupture would be the final histrionic act from my Overly Dramatic Vagina, however discomfort from surgery soon turned into chronic pain in my right side, which contributed to absenteeism from work, a hell of a lot of missed social occasions, and a very depressing sense that I was going to be burdened with this for the rest of my life.

I still had no idea what was happening to me.

Many infertile women with endometriosis experienced debilitating painful periods as teenagers, but were misdiagnosed.

The gynecologist I saw just last year followed the trend of ignoring or downplaying the seriousness of my complaints. “You must have an old sporting injury, I think it is muscle pain,” she told me. Given that there are no known ovarian muscles, I did not feel this was a relevant line of enquiry. She insisted that I look at a physio instead of having her undertake a basic examination. She told me that I should see a colorectal doctor because it was “probably my appendix”. She told me to take Buscopan for the pain, and suggested chlamydia had caused my ectopic pregnancy. I explained that I had been in a monogamous relationship for over a decade, but she pressed ahead with an STI check. As predicted, it turned out negative.

This woman, who I was paying over $200 an hour to see, ignored 15 years worth of evidence and pain, and doubted my ability to locate and describe my issues accurately. Like almost all the doctors before her, she looked everywhere but my uterus for an explanation about my freakin’ uterus.

After the surgery, I woke up to be told that I had undergone four procedures, and that the operation had been a lot more intensive than predicted. I was told that my entire cervix was covered in endometriosis, causing scarring to my womb. It had penetrated up into my remaining fallopian tube, meaning I would be at high risk for another ectopic pregnancy – and it had likely caused the first. They cut out the endometriosis, removed scar tissue, excised several cysts and, for fun, took out my appendix — “just in case” it was the real issue all along. Even when confronted with my battle-scarred insides, the doctors still doubted me.

Most women who suffer from endometriosis will experience multiple surgeries to treat it.

This is why I am sharing my story, and why awareness about endometriosis and its effects must be a greater priority in women’s healthcare. It is the leading cause of infertility, and also the most treatable. Its prevalence in the population is just shy of breast cancer, yet no one really knows about it.

While it is hard to determine endometriosis without surgery, that surgery is quick (just an hour) and has a recovery time of about three days. Had someone been willing to explore my symptoms when I was first presenting them, my life may have been very different. Are vaginas really that terrifying? Are we so prudish in our attitudes towards them that we create health risks for the 51% of people on Earth who have one? 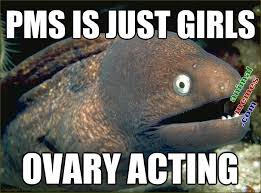 Now armed with just one fallopian tube that allows an egg to reach my uterus every second month, and a scarred uterine wall, I face an entirely different challenge — diminished fertility, and an impaired ability to carry a pregnancy to term without incident. I am told that the closer I get to 35, the riskier this becomes.

Having a child is something that I want, but I do not want to rush – like most Sydneysiders, the financial stress of children is not something I can approach lightly. But if I’d had FIFTEEN YEARS to prepare for this? Well, I might already have a child by now, or I might have been able to save up for and begin IVF, should I be unable to conceive.

In this month of awareness, it’s important that we share our stories, and that doctors are willing to listen. I want to know that if I pass this onto a daughter, she will be treated seriously and with respect, and given all the knowledge she needs to make the right decision. I want doctors to trust women and to listen to their symptoms without prejudice, without judging them as emotional or exaggerating. I want every young woman who can relate to this article to insist on a higher standard of care, and to impress upon their doctors that they are tuned-in to and in charge of their bodies.

I’d like a cure too, but hey, I’ll settle for human kindness conveyed via chocolate, dignity in loose fitting pants and endless reruns of When Harry Met Sally in the meantime.

Is Aunty Flow a horrible bitch when she visits, and you’re not sure if that’s normal?

Head to these sites for more information:

Kirsty Brown is the Executive Officer of MusicNSW, spokesperson for the Keep Sydney Open campaign, and former Managing Editor of The Brag. She has achieved all this and more, despite owning a homicidal uterus.