I mean, probably. There are still three months of movies to come and lord knows Hollywood isn’t exactly short of terrible movies. Still, even in a year that has given us such almighty turds as the computer game adaptation Need for Speed, the Australian fantasy-horror I Frankenstein, Clint Eastwood’s Jersey Boys musical, and even Making the Rules with Robin Thicke, none have made me quite as angrily resentful of a filmmaker as this one did. I’m still trying to comprehend it, but short of a support group for survivors of Kevin Smith’s follies, purging with words will have to suffice.

I Am The Walrus

Justin Long stars as Wallace Bryton, an aggressively obnoxious podcaster who earns a six-figure salary – don’t bother asking how he earns so much, it isn’t explained – who spends his time visiting wild and wacky people and places before going back to the studio and telling his travel-phobic co-host, played by Haley Joel Osment of The Sixth Sense (1999), all about it. Their show is called The Not-See Party, and that’s funny because it rhymes with Nazi. Geddit? Never mind, they explain it several times.

Unfortunately for Wallace, a trip to Canada results in a detour to a creepy mansion owned by the eccentric Howard Howe who proceeds to drug Wallace, amputate his legs, and filet him into a human walrus using femur bones as tusks. Goo goo g’joob.

Spoiler alert: images of the, er, final product have sprung up online and they ain’t pretty.

He’s a filmmaker that continuously indulges his worse tendencies to pander to a demographic that can best be described as husky, white straight dudes, who chortle and pat each other on the back in resigned recognition every time his lead character calls a woman a “bitch” or a woman make’s a man’s life hell. Dem bitches be cray-cray, you know.

Of course, this being a Kevin Smith movie, the only woman in the movie is a super-hottie, played by Genesis Rodriguez, who dates Wallace despite knowing he’s a douchebag cheating bro-dude who is obviously punching far above his weight. Kevin Smith isn’t even trying anymore to mask his hideous issues with women.

Look, it’s nice that Johnny Depp decided to make a cameo in a movie which he wasn’t in just for the paycheck – I’m looking at you, The Tourist (2010), The Lone Ranger (2013), and all those damned Pirates of the Caribbean sequels – but you would hardly guess he was taking the role seriously given the performance he gives in Tusk is so far over-the-top he circumnavigates. He needs to stop it now. It’s truly nauseating watching him mince about with his limited range of terrible accents and wide-eyed goofy facial expression. Please, just stop.

The Dude Does Not Abide

Largely playing off its director’s Clerks pedigree, Tusk sells itself as a stoner movie — there’s even a specialty strand of pot sold at Los Angeles medical marijuana dispensary Buds & Roses to tie in with the movie — but stoners deserve better than this.

Stoner movies can be fun – Gregg Araki’s Smiley Face (2007), for instance, is a great example of a director making a movie about being stoned that you don’t need to be buzzed to enjoy – but even fans of weed watching this with their bong at the ready will likely find themselves exasperated by Smith’s smug idiocy. It’s hardly surprising to learn Smith was high when he made the movie; the end product indicates a filmmaker who was so toked out that he didn’t know he was making something so embarrassing. 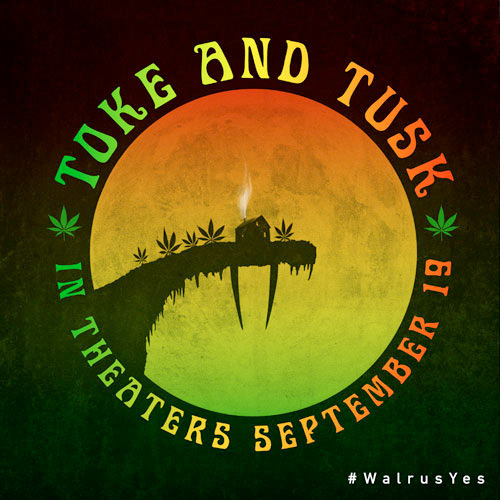 Did you know Canadians have accents and like hockey? I know! So funny, right? I’m not above a cheap gag at another nationality’s expense, but jokes like these are systematic of Kevin Smith’s laziness. Instead of getting laughs from genuinely witty observations (about Canada, or anything), he goes for the easy laugh. And when delivered by repugnant characters it raises not even a mere smile of appreciation. And I don’t even care to know why he repeatedly has his main character urinate so much. It’s all just so unnecessarily bottom of the barrel.

Amusingly, Tusk is rated MA15+ for “mature audiences”, which suggests you need a brain capacity above that of a 15-year-old to watch. It would be beneficial if you didn’t.

Unlike other recent cataclysmic disasters like Winter’s Tale (2014) and The Legend of Hercules (2014), there is no fun to be found within Tusk’s hall of horrors. Not only that, but it’s genuinely bad filmmaking. Lazy and witless, not at all scary and weighed down by a cloud of secondhand smoke that has none of the potency that the director thinks. It’s time to draw a line in the sand and swear off Kevin Smith movies. Like, forever. Given his next movie is another sequel to his breakthrough Clerks (1994) that shouldn’t be too hard.

Tusk is in limited release.