It's been a weirdly huge year for goat news. So, here they are, the top ten goat stories of the year, running at you and prodding you with their horns a bit.

Gangs of goats have been wandering into classes at Walter Sisulu University in South Africa.

Holes in the fencing allow them to slip onto campus and it’s becoming a bit of a problem — partly because they haven’t paid to sit in the lectures, but mostly because they piss everywhere. Busisiwe Radana, a student at the university, told the Daily Dispatch, “They walk in like they are humans who belong in a library. They pee whenever and wherever they feel like it.”

Are these goats making a bold statement on accessible higher learning, or are they pissing everywhere because they’re goats? You decide.

What’s got four legs, likes to eat nettles and is back in Canberra this month?

That’s right, Tony Abbott. But also — goats! After a successful trial earlier this year, 30 goats are hanging out around Lake Burley Griffin, eating all the tough woody weeds that machines can’t access.

Goats are increasingly being used as an environmentally-friendly form of weed eradication, and have also been employed to chomp down on dry grasses to prevent forest fires in Spain. Nice one, goats!

Back in August, there was a mass break-out of animals from a livestock auction house in New Jersey.

Flocks of goats and sheep destined for the slaughterhouse ran out onto the streets. It was the work of a lone goat — Fred.

Fred escaped from the same livestock auction house a year prior and had been seen lurking around on the day of the crime, headbutting the gates. Locals strongly suspect he came back at night and finished the job.

While most of the animals were caught, between 10 and 20 disappeared, so we can only assume that they have joined Fred’s crack team and will be back for more.

7. Frank The Goat Gets Hungry Jack’s

Frank the Goat is a bit of a celebrity in Caloundra and he had a real nice Sunday. He went to Hungry Jack’s. Look at him! He’s a goat, but he’s in a car! Getting Hungry Jack’s!

At Sunnyfield Disability Service in Tamworth, Ernie the Goat is training to be a therapy pet. He loves Froot Loops and he enjoys playing soccer with fitness balls.

Ernie visits Sunnyfield twice a month, helping residents overcome their fear of animals, and assisting with therapy programs. What a charmer.

5. Sparky The Goat Goes To The Tony Awards

Fun fact: Nathan Lane also did a poop on the red carpet after failing to receive an Oscar nomination for The Birdcage in 1997.

Sparky the Goat, a cast member of the musical Once on This Island, rocked up to the Tonys this year. He was not nominated for an award, and he responded to that slight in the only appropriate way: by taking a dump on the red carpet.

Nathan Lane did not approve.

Residents of Boise, Idaho were absolutely baffled back in August when 100 goats appeared from nowhere and started roaming through their neighbourhood.

It was like a magic realist dream. A fantastical herd of goats of every size, shape and colour, sweeping through suburbia and just annoying the hell out of everyone by eating their lawns.

In the end, it turned out they’d just escaped from a weed clearing job and they were quickly rounded up and packed away on a truck.

#Breaking – About 100 goats are on the loose right now in a #Boise neighborhood. They are going house to house eating everything in sight. Nobody has a clue where they came from…updates to follow pic.twitter.com/K0ghUwQEfk

It’s a long-held tradition of the Royal Welsh regiment of the British Army to have a goat among its ranks, so when Lance Corporal Shenkin III passed away, a new recruit was needed. An Army team set out into the Welsh wilderness, and it was here they met Shenkin IV, who thoroughly outwitted them. 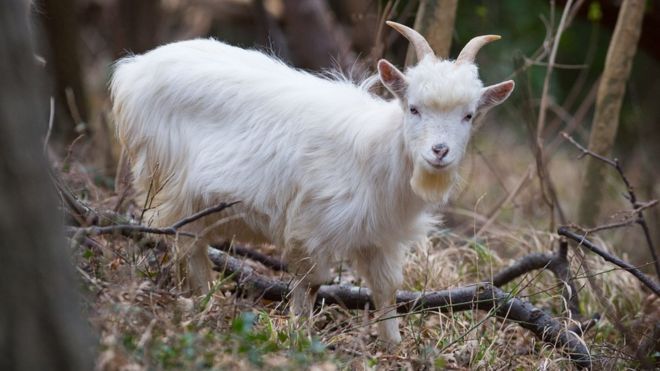 The crew spent eight hours trying to capture the goat and were absolutely unable to, having to restart the search a week later because it got too dark. Eventually, Shenkin IV was caught and he’s now a Fusilier, which the dictionary tells me is “a soldier armed with a fusil”.

So that clears that right up.

It’s the exercise craze sweeping the world —  goat yoga! It’s yoga, but with goats! Dozens of tiny goats that jump on your back while you try to do yoga. For $35 US, you can do difficult exercise made more difficult on account of goats.

Once the goats get too big to clamber over the clients, they just chill out on the sidelines and yell at you about your form.

There could be no other number one. They are the champions of my heart. The piss goats.

375 goats had to be airlifted out of a Washington State Park because they were addicted to human urine. The goats had become aggressive, stalking hikers as they travelled through the park, hoping to get a sip of their piss.

Over the years, hikers have been relieving themselves along the tracks in the park. The goats come along and eat the vegetation, and they’ve developed a taste for the salt and nitrates. It’s like the hikers have been sprinkling chicken salt all over the goats’ food supply, and now they’re hooked. Hooked on piss. The only solution was to relocate them for a detox. 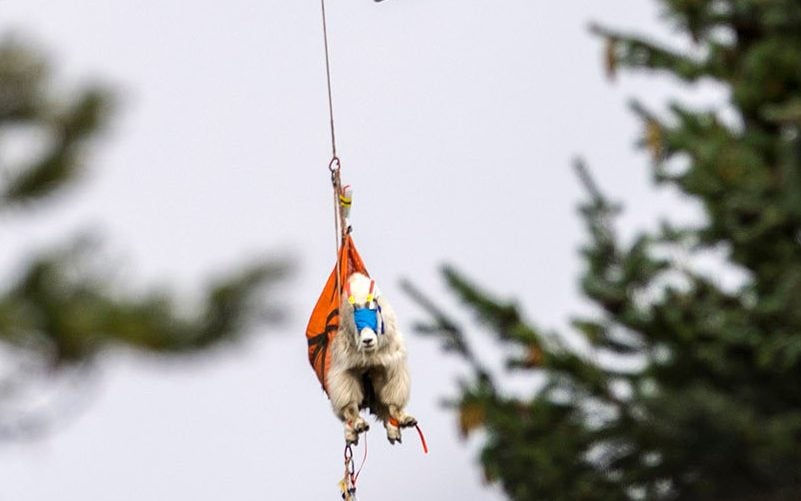 The bulk of the troublesome goats have now been placed in a more remote park, far away from all of our urine, but if this year’s goat news has taught me anything, those goats will be back, roaming our streets, bleating for our piss.

Who are we to deny them?

Elyce Phillips makes comics, comedy and general nonsense. Her writing has appeared in McSweeney’s and Funny Ha Ha, and you can see her make a fool of herself regularly at The Improv Conspiracy in Melbourne.